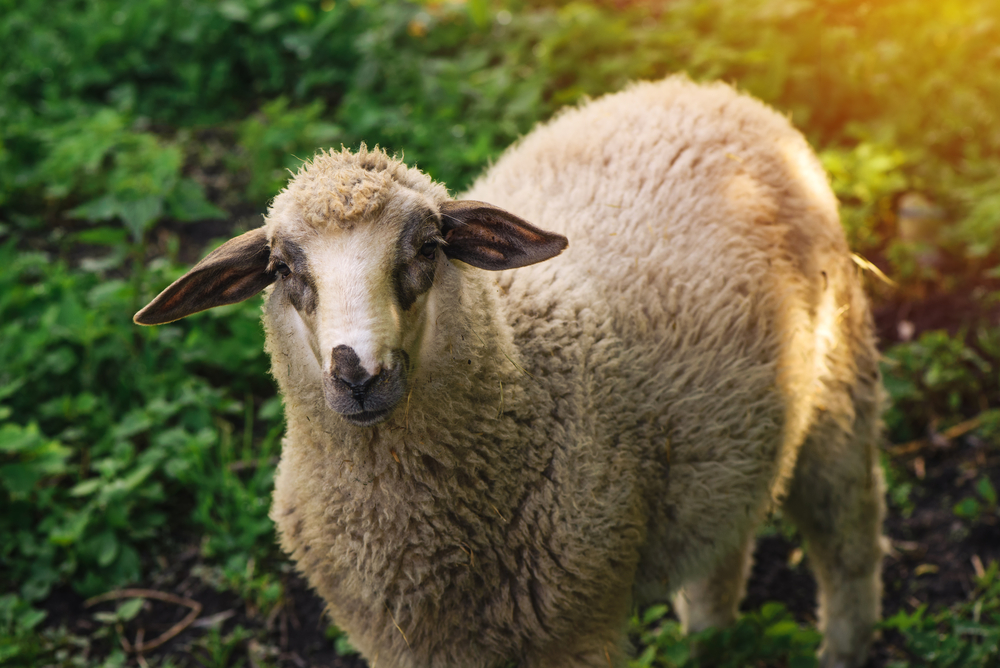 Sheep are mostly reared for their wool, but they have another exceptional use — as dairy animals. While most people prefer cow milk over other milk types, sheep milk is highly nutritional and has a rich and creamy taste.

They have significantly higher milk solids, i.e., fat and protein. Therefore they are the most preferred for making cheese and yogurt. It’s rich in Vitamin B12, A2 protein, and folate, being naturally homogenized.

Sheep ewes produce a lot less average milk than goats or cows, so sheep milk is kind of rare but is almost the best variety of rich, creamy, butterfat milk. Hence, sheep rearing is a profitable business that does not require too much maintenance, either if you choose the right variety.

Most sheep are calm and docile, making them easy to rear.

East Friesian Sheep is one of the highest milk producing sheep with a rate of 300 – 600 liters of milk per 200 -300 day lactation period. They originate from Northern Germany and area heathland type sheep.

Friesian sheep deliver at an average of two lambs per lambing period. These sheep are often successfully crossbred with other sheep breeds to ensure robust offsprings since original Friesian sheep require specialized care. They require a high-quality diet for the high production of milk.

A distinguishing factor of East Friesian Sheep is their tails, known as ‘rat – tails’ since they do not have any wool on them and their faces, ears, and legs. They have a pink nose and pale hooves. These sheep have naturally polled heads.

They have a sturdy built, and the wool on their bodies is mostly white but available in dark brown varieties also. They are not too adaptive to people and are not supposed to be kept in flocks as they perform poorly among a lot of other sheep.

The breed of Awassi sheep originates from southwest Asia, and they are a wool breed sheep. Their body is enveloped with wool but sometimes except for the chest and belly. These sheep are well adapted to diverse environments and weather.

Awassi ewes are efficient in milk production. They produce 150 – 180lb in the duration of a 150 day lactation period. High output, along with low consumption, makes this breed an economically profitable one. These sheep tend to be calm  – natured and easy to milk.

The dairy Awassi type sheep are larger and more refined than the common Awassi sheep. They are resistant to parasites and diseases, travel long distances, and have a natural grazing ability.

Awassi sheep tend to tolerate harsh temperatures and adapt excellently to diverse environments and weathers. They have energy reserves stored in their fat tail that are used in the state of undernutrition.

These sheep are multicolored, ranging from white to brown to black to grey and spotted. They have a convex profile with a long and narrow head and are incredibly hardy. Awassi males have horns, and females have scurs on their heads. They have a long neck and durable hoofs for rough terrains.

Assaf Sheep are a crossbreed of Awassi sheep and East Friesian Sheep and, as a result, have a high rate of milk production. They produce 992lb milk over 173 lactation days. Their milk is high quality with lots of fats and proteins and a rich flavor, which is great for making cheese, ice cream, and yogurt.

They are strong and sturdy animals and adapt well to native climates. They have a white-colored face and body. Their heads are polled, and ears are long and drooping. They are resistant to most worms and diseases. They are also affable, calm – natured, and easy to milk.

Assaf sheep unite the qualities of both the Awassi and Friesian Sheep. They are reared under a concentrated production system, including artificial rearing, weaning of lambs at birth, and ewes’ milking at parturition.

The blue Roquefort cheese is made out of the unpasteurized milk of Lacaune sheep. Their milk has high solids (fat and protein content), and they produce 610lb milk in the lactation period of 163 days.

They are easy to milk due to high oxytocin release during milking. Their average flow rate is very high, and the milk’s sufficient butterfat content makes it ideal for making cheese.

These sheep originate from France and are medium-sized but much more sturdy than other dairy sheep. They have no horns and have only a little fleece on their bodies. Their heads are long, snouts are round, and ears are floppy. Small hooves help them navigate in rocky and hilly terrain.

They are less susceptible to diseases and can adapt to harsh temperatures. They are also good at pasture management and therefore are excellent grazers.

The British Milk Sheep is crossbred from four different sheep breeds and is used for procuring meat and milk with high proficiency. They produce 250 – 400litres of milk in the duration of 300 lactation days. Their milk has 6% fat and protein content, which makes it perfect for making cheese.

They have a large – framed robust body with a small, wooly tail,  a polled head, and small pink or white ears.

Their face and body are white with occasional black patches. They have fleece on their body except for their face and legs.

These sheep adapt to most environments and are, at times, crossed with other breeds to further improve their milking ability. They have easy lambing and sometimes even triplets. Their nature is friendly and docile.

Chios sheep are domestic sheep that are bred for milk. Chios ewes can produce up to 265 – 600lb milk per lactation period of 210 days. Their milk is used in making various types of cheese, such as Manouri, Feta, Batzoz, etc.

These sheep vary from medium to large sizes. They are white and black, or brown spotted around the belly, legs, ears, nose, and eyes. They have a semi-fat tail.

Most sheep of this breed are horned. Male rams have large spiraled horns while ewes have small knob-like horns. They get mature early and are therefore mated in the early stages.

Chios have a high rate of lambing. They are well suited to native environments.

The Icelandic sheep is a Northern European one of the short tail variety. The Icelandic ewes produce high quantities of milk up to 1 – 3litres per day during the lactation period of 130 – 180 days. They also have high rates of births.

These sheep have a slender body frame and long, light legs. There exist both horned and polled varieties in many colors, including white, black, gray, brown, etc. They have a patterned body.

Icelandic sheep are hardy animals and are resistant to diseases but are individualistic animals. They don’t do well in flocks. They are dominating and aggressive towards other sheep breeds and have to be taught to be friendly. They can sustain less fodder.

The Clun Forest Sheep originates from England and is an elegant breed of sheep.

They have a medium-sized structure with a sturdy body and smooth bare dark brown face. They are reared to procure milk, meat, and wool.

Forest ewes can produce 2lb/day for the duration of 130 – 150 lactation days. They are really productive and highly fertile. Ewes have a good mothering ability. Their milk is high in butterfat content and has an abundance of richness.

These sheep can perfectly adapt to rigorous environments due to being fine foragers. They have a long life and have a particular resistance to diseases. They require low input, too, and hence are very affordable.

They have an excellent and robust body structure. Clun Forest sheep have small upright ears, a muscular neck, a broad back, bare legs, and wide pelvic structure. They have a white body with moderate wool and a brown face and legs.

They have a high lambing rate along with a high weaning and rearing rate. Crossbreeding with other breeds results in improved productivity among Forest Sheep. They can be crossbred with East Friesian Sheep to obtain more richness in milk content.

The Bergamasca sheep is a domestic sheep originating from Italy. They are used for milk, meat and crossbreeding to improve meat yield. They produce 550lb milk during the lactation period of 6 months.

They are large-sized and tall with white faces and bodies. They have polled heads and long drooping ears. Bergamasca sheep can adapt well to the local climate.

The Bovec Sheep is native to Slovenia. They are raised to procure milk and meat. Bovec sheep are white, sometimes even brown or black, and they have a relatively strong build.

Bovec ewes produce 480lb milk in 210 lactating days. The milk is of good quality, with about 6.3% fat in it. The rate of lambing in Bovec sheep is low, and once a ewe has given birth to twins, she is not milked again.

Bovec sheep have small, convex profiled heads, small ears, and a bare belly. They have small, nimble legs with an inclination in their back legs, enabling them to easily tread on steep meadows. They adapt well to local climates, socialize in herds, and are friendly.

The Karyaka Sheep originated from Turkey and reared for their milk and meat. Karyaka ewes produce 88 – 99lb milk during the lactation period of 130 – 140 days. They grow fast but require a lot of grazing.

They have a small, sturdy built and a long, thin tail. They are white with black legs, head, and eyes. The Karyaka rams are thickly horned while the ewes are generally polled. They are well adapted to local climates.

Sheep produces considerably less milk, but their creaminess, richness, and milk solids are undisputed for obtaining rich dairy products. Isn’t rearing sheep worth the time, when it provides us with such great profits?

Sheep are not much trouble even. Most sheep are very docile, and milking them is not a hard task too. Moreover, sheep can also be reared for their wool and meat.

So go ahead and choose your very own sheep herd!

5 Goat Predators that You Should Look Out For

7 Quietest Goat Breeds to Raise on Your Homestead