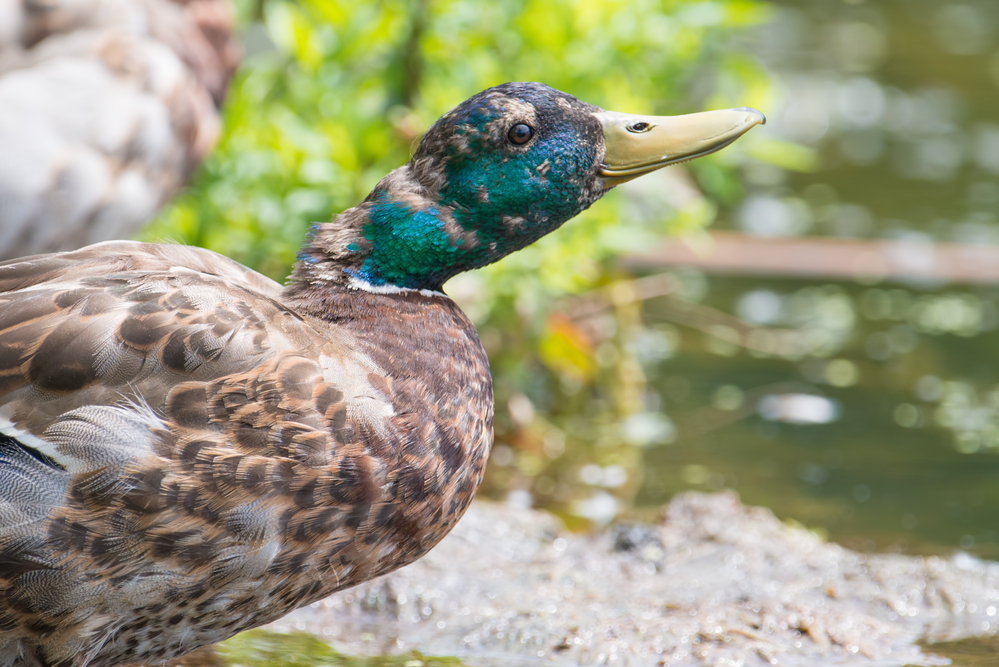 Ducks are attractive, curious, friendly birds that will add a lot of beauty to the homestead. The gorgeous plumage of each breed makes them stand out. They are very sturdy and low maintenance birds, which will require the least of your attention. But if you are a beginner at petting ducks, you should know a few facts about them.

Besides having a charismatic plumage, duck feathers serve a few very essential roles.

Duck’s feathers are waterproof, which keeps them isolated, helps them float, and camouflage. Male ducks utilize flashing colored plumage to entice females. But they undergo a process of renewing these feathers every year to maintain their characteristics.

Why Is My Duck Losing Feathers? Probably Molting!

Most duck breeds shed their plumage two times every year. This process is what we know as molting.

This process helps them get rid of their worn-out feathers and grow again. Unlike chickens, Ducks simultaneously go through the molting process. They shed their feathers all at once, and it grows back in a few weeks.

But before we jump into that, we need to understand that there are precisely two families of ducks, and they have different molting patterns. One is the Muscovy, and the other is Mallard.

Any duck breed other than the Muscovy duck breed falls under the Mallard Family. They include Pekins, Swedish, Indian Runner, Silver Appleyard, Calyug, Call, and many others.

They Mallard descendent ducks have a different molting cycle than Muscovy ducks. The mallard family ducks are mostly migratory birds, so the molting depends mainly on mating and migration timing.

However, the domesticated breed of the Mallard Family does not migrate. But they still have the gene that triggers the message of the migratory season and climate change. Hence the migratory characteristics still affect these birds.

Molting patterns of Mallard-descendants are entirely different from the Muscovy ducks. In addition to that, male and female Mallard family ducks again have different molting timelines.

The molting of different breeds can vary in other domesticated breeds and foreign genes in the same breed.

Molting is also influenced by the climatic conditions, weather, and care given to the birds.

The molting period lasts around 1-2 months. Despite all these categorizations, each duck breed and even ducks of the same breed can have different molting cycles.

These breeds do not migrate. They live in a tropical and subtropical climate. However, they can fly, but that is to protect them from predators and not to fly.

Usually, only female ducks of this breed undergo molting. Female ducks have something called the “nesting molt,” which precisely means that they use the shed feathers to make their nest comfortable. Most femaleducks lose feathersprofusely, but some useless feathers to align their nest.

Research showed that Muscovy ducks molted in July and August, but there’s still proof for it. Later what could be concluded is that the molting must have occurred in a controlled environment.

Now since there is significantly less documentation on what needs to be done during the molting phase of female Muscovy ducks, let us help you with the information we have gathered.

What to Feed Them During Molting?

Re-growing feathers need a lot of extra protein. You can help your Muscovy females by giving them different insects, kale, parsley, or favorite treats (dried mealworms). The females undergo a 30-35 days egg incubation period to use this extra protein to sustain. You can start to prepare them from late winter or early spring.

Once the duckling’s hatch, the female Muscovy ducks become weaker. Some extra protein in their food can help them recover from the nesting molt phase. It’s a good idea to increase the protein levels to 20-22%.

Otherwise, when there is considerably less feather loss, there is no additional requirement to increase the protein in their food, until and unless they can free-range and have enough space to forage.

Different Kinds of Molting in Ducks

Here are the different kinds of molting in pet ducks:

This molt is usually negligible if you have only female ducks. This molting happens only in drakes, as they need new high quality and brighter plumage to attract their mates. Hence, the maleducks lose feathers, which are dull winter feathers and are replaced by gorgeous feathers called “nuptial” plumage.

You may also notice a few females participating by showing their most colorful, bring feathers and markings. This is the marking of their breeding season.

During these periods, you may find a little disturbance amongst the ducks. The male ducks try to drive away their contenders and try to mate with a female. Females, on the other hand, show safeguarding of their favorite drakes and also defend their eggs.

Drakes again move around, flapping their wings, showing off their most beautiful and flashy feathers.

The molting phase is the biggest in the year, which lasts for 2-3 weeks around July. After the exciting breeding season, drakes will want to shed off their nuptial plumage and go back to the much duller and safer plumage, called the “eclipse” plumage.

The eclipse plumage of drakes and hen’s plumage looks similar, which is subdued and washed out. This dull color gives them protection from predators. Even though the molting period is dangerous for the ducks, the new feathers keep them safe for the remaining year until they molt again.

During the molting season, both drakes and hens lose their downy undercoat. The undercoat, which holds the central part of the duck’s feather around their body, keeps them insulated.

It is the final molting period for both Drakes and Hens. This shows up differently in males than in female ducks. This is the period where they lose their flight feathers.

In wild ducks, they tend to lose their flight capability entirely during this time. However, the wild female ducks raise the young ducklings and do not care about a thing in the world.

Drakes tend to stay together with other drakes, to keep themselves protected. And rightly so, as they still have a few bright, attractive plumage on them. They stay away from water and predators.

This must be making you think that will the ducks be naked during this period then? The answer is no. The ducks lose their waterproof, sleek top feathers only gradually and are slowly replaced throughout the year.

For domestic ducks, who are well protected and fed, losing all the feathers at once may not be a problem. Ducks are true hard molters, unlike the chicken. You can see a remarkable change in their plumage after the summer molt.

You may notice that your ducks are not very playful and interactive during this period. They often look very messy, and their bills are covered with a lot of plumage.

What Will Help the Ducks When They Molt?

The duck’s feathers mostly consist of amino acids, which are building blocks of proteins. When molting and trying to re-grow the feathers, the best addition to their food can be lots of proteins. It is quite a challenging task for them to lay eggs and regrow feathers simultaneously. Hence, this results in fewer eggs as it is very challenging for the ducks.

But for wild ducks, they do not have much difficulty as this is when they raise the ducklings. They hardly lay eggs as it is their post-breeding period. Wild ducks also do not find it challenging to find the protein they require from nature. As during the summers, there are plenty of insects and bugs available in nature. That is perhaps the beauty of co-existence.

There is an added advantage to your pet ducks, as they can have quality, protein-rich food to meet their needs. The 2-3 weeks, to help them heal faster, you can provide them with extra worms, bugs, greens, and some spare time to free-range. This makes them feel better and comfortable.

They also need a constant source of clean water during this time, to clean their sinuses and bills, which may have plumage that they have cleaned from their body. New feathers are very soft and sensitive. So, make sure you are not maltreating them during this period.

Other Reasons Your Ducks May Be Losing Feathers

Not just molting, there can be reasons which can be indicating to other problems that your ducks might be facing.

Feather pricking, also called peking, is typical behavior in any bird. And only a few birds in the flock show this behavior. Drakes have beautiful plumage, with bright shiny feathers. Ducks are often curious birds that can be attracted by these colorful feathers.

Pecking feathers can slowly grow into a habit and spread amongst others in the flock. It is imperative to control this habit early to keep the community safe. There can be multiple reasons for pecking, besides beautiful feathers.

Poor environmental enhancements, overcrowding, low lighting, and some aggressive birds in the flock can be a few.

This behavior is the continuation of the previous point of feather pecking. When open skin and wounds are visible to the ducks, they often tend to peck more. This results in cannibalism. Do not be alarmed; all you have to do is remove the injured duck to a different place/cage.

You must be careful while re-introducing the duck into the flock once it’s healed and observe the flock to prevent pecking again.

Various surrounding factors and management can lead to poor health of your birds. This can add to losing feathers, and you must keep a close watch to identify the problem. You must give enough clean water and feed and try to control the infestation of mites, lice, etc. to maintain your duck’s healthy feathers.

Good feed and clean water to drink and clean themselves are required for good feathers, good meat, and eggs from your ducks. You need to ensure that the food is nutrient-rich to cater to their energy requirements throughout the day.

The ducks can lose feathers due to excessive stress building within them. The reasons can be extreme temperatures, any illness or disease, lack of clean water, and food.

Now that we have discussed all the factors that your ducks may be losing feathers for, you should not ignore any alarming signs that your pet shows. Do not be alarmed by the quality of feathers at the starting of their molting period, as they will be dry, rough, and messy. Each duck breed is unique, and they behave differently during the molting period.

The only possible way you can maintain your duck’s health is by making sure they receive well-balanced nutrition throughout the year.

What Is the Average Duck Lifespan? (By Breed)