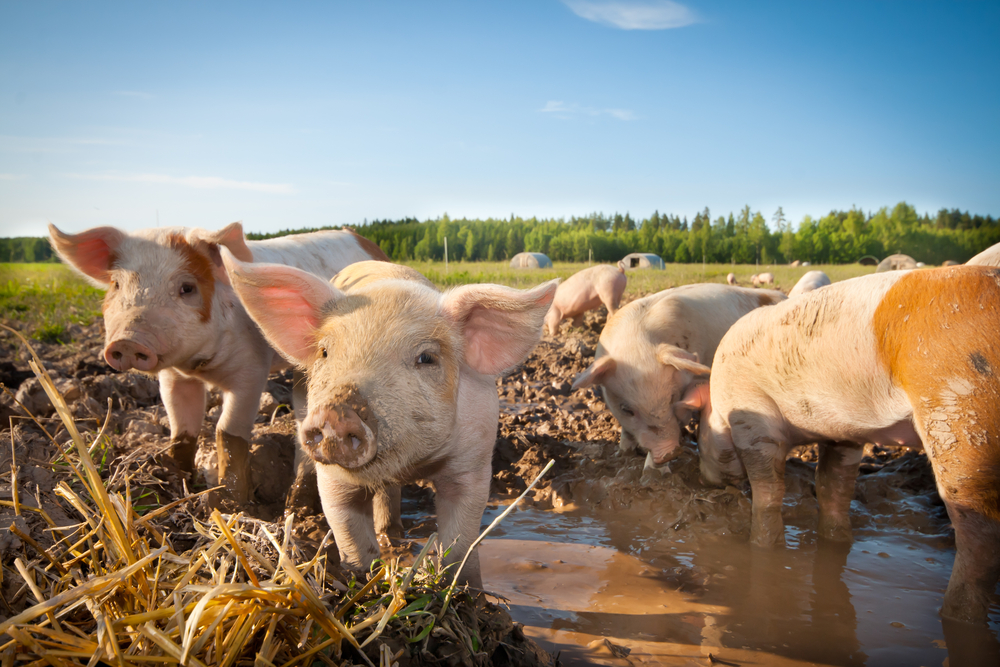 Truth is you don’t want to be missed while the crowds after pig husbandry. No matter if you’re a farmer or layman, pig (also known by names like hog, porker, or swine) is something that surely catches our attention.

Lately, masses are attracting to miniature pigs and occasionally showered preferences for Guinea pigs. In a sense, these two breeds demand your attention significantly. More or less, mini-micro pigs are also to be considered as a pet nowadays.

While it occurs about harvesting them, you feel mostly confused between male or female pigs— which should you keep? This article will veil out your doubts.

Vividly, pig farming has grown over the years due to the demand that it is as the principal source of bacon, pork, gammon, and skins. And, also for the very usefulness that pig farming expects less minimum of labor. Ordinarily, new commercial, domestic pig breeds grow in a short period, showing the same ROI (Return on Investment) in the meat industry.

With a connection to humans, this creature is social, loyal, and playful. It can hardly be aggressive, out of control (it varies from breeds to breeds). In intelligence, the pig is ranked in the fourth position.

Castration is removing the testicles of male pigs (which is not to use for breeding). The animals who are castrated are quieter and more comfortable to train. Ultimately, castration helps to increase the plumpness of any animal and also minimize the hardness of smell.

Why does your pig need to go through castration?

Male pigs (also called boars) are usually aggressive and hard to handle. Castration helps them to be quieter, step with your instructions. It also helps to gain the amount of fatness.

Castrated pigs have a minimum number of smells. Usually, a young pig is castrated while it is about 2-3 weeks of age.

How to start castration?

You will need an assistant to hold the pig for castration. Firstly, Bend its head down and control it by the hind legs. And keep it between the handler’s knees. Make sure you stay away from the mother pig from the litter. Keep away from her, where she cannot hear or see the litter.

To perform it, you will need a sharp, clean knife and a razor blade. This castrating guide will precisely aid you at every phase of the job.

Male vs Female Pigs: Which Should You keep?

You probably don’t know, but in farming, a male pig is called a hog, and a female (mother pig) is known as a sow. A virgin pig (before the age of giving birth) is called a gilt. Also, baby pigs are known as piglets.

Before you firm an opinion, first thing first, the main distinction between a hog and sow lies in size, weight, and taste difference. Male pigs are large and more weighted compared to male pigs (actually, female pigs grow large in size and weight more in the first year), but male pigs are more hostile than female pigs in nature.

Noted to be made that male pigs tend to be infected with testicular cancer, which shortens male pigs’ lifespan. Indeed, spaying helps to avoid the disease to a great extent. Neutered males tend to be easygoing, strong, and healthy.

Additionally, pigs are good pretenders who are instructed at your lessons. Hogs can often kill piglets and eat other animals (it happens due to ill-genetics and bad learning). What we will recommend you to avoid such breeds.

Also Read: How Much Does A Pig Cost to Raise?

How to identify a pig, whether it is male or female?

You might think that you can quickly point out a pig, whether male or female, at your first glance. But it’s not like that! As a matter of evident, male and female pigs look so identical. A straightforward observance made the job easier:

Will spaying or neutering help your pet?

The reason is— neutering imposes for the pig to control temperament and size. Also, it helps the breed to get rid of deadly illnesses. This neutering process starts at the age of four months (as per the veterinarian). The operation is purely done surgically with Chrytordism, which has high risk and costs a little bit.

As we intensely studied the matter and learned that the choice between male vs. female, the majority supports have under female pigs’ lap.

That’s why we’d most likely offer you a quick-sneak into the harvesting of female pigs (sow). It is plainly described below.

A sow can give birth to 7-12 piglets within two years of span. The process of giving birth is called farrowing. Before farrowing, a sow shows many signs, e.g., she will become restless and start making a nest before the initial hours of giving birth.

Sows, also known as mother pigs, are very preventive. After giving birth, the mother pig carefully separated their babies from the stall to avoid accidental lying or rolling over one of her piglets.

As a result, sow and hog can keep together because it strengthens the bond between the two. It is speculated that with the combination of two, it leads to a happy, calmer environment. In contrast, it reduces the stress level— it emphasizes productivity and positive growth of the breed.

It is said that in giving birth, a female pig tends to be aggressive to save their babies (in case of any harmful consequence).

In comparison to hogs, female pigs act more actively and have more demands than hogs.

A sow can be infected with different roundworms. People who have harvested pigs noticed that roundworms get stuck on the animal’s dung (usually it grows between 24-40 cm long). The bad thing is, if the roundworms olds between 2-5 months, it can cause diarrhea, weight loss, and lung infection.

Many times, young sow can’t bear the hurdles and spare their lives. Finally, the roundworms pass into the intestine, and later, the germs attack the lung, which leads to coughing and lung ailments.

Therefore, it is advised to clean the pigsty from time to time, which should be performed through caustic soda. After rubbing the floor, it should be left to dry for 2-3 days.

Furthermore, the infected pigs of roundworms are advised to be kept alone in an empty field or shelter. After discarding, space should be plowed to graze other animals.

Another common health issue of sows is the Trichinella attack, which is a parasitic worm. It shelters in the intestine and muscles. This occurrence doesn’t appear to be a problem, but the animals who eat the sow’s meat world ultimately suffer from it.

It is advised that a sow should not wander alone. Because somehow it can eat plants that are stained with human feces. Likewise, it can also be infected with tapeworm (which is found among human beings). Unquestionably, in the future, people who eat them can be contaminated with tapeworms (if it is not cooked correctly).

Sows are also sheltered for lice (in color, it is dark black). It irritates the sow, and later it leads to scratching. Soon the scratch turned into a wound. Rightly, it can cause various infections. To avoid it, the handler would have to cleanse the area with kerosene or a lighted cigarette (you can also spray the arrow with veterinary medication).

Also Read: What is the Average Pig Lifespan

In general, most breeds of pig ready for puberty after getting five months of age. You can figure it, while the sow comes outside for heat (this process needs a little more instructions or carefulness).

Before bringing the sow into heat, it shows different behavior, including extreme restlessness and unwillingness for food.

She will stand still and pressed hard with the hands-on both sides of her back— indicates that she is ready to accept the male. At that moment, the vulva becomes swollen, which was pink earlier.

In common, a sow is recommended to be left alone for heat for 8-36 hours.

The process of sunbathing is compelled to control breeding. Without its execution, it is seen that it results in too little breed or health problems of the sow.

When bringing the sow into heat, it is advised to keep the sow together with the hog— to arouse her through the hog’s smell.

How to care for a pregnant sow?

At the end of pregnancy, the diet should be enhanced to a great extent. Meaning, the ingredients of the nutrient have to increase more than before. Particularly, at that time, the caretaker has to offer clean bedding for the sow when the birth is too close.

Make sure in this time, and the sow can access fresh soil or plants where no other pigs have kept for grazing. It helps the sow to gain the minerals she lacks. Also, a sow proposes plenty of fresh, clean water regularly. Scientifically, A sow with piglets needs 20-30 liters of water in a day.

How to care for the piglets?

In reality, piglets need to take the first colostrum from the mother. We generally noticed that piglets take the first feed from mother within one hour of being born.

Commonly, a sow has fifteen teats. In appearance, those treats are long and thin, comfortable enough for piglets to suckle. A baby bird suckles them at every hour. The strongest piglets grab the nearest one that produces more milk than others. After the sow getting old, this size of the teats grows as well. That makes it difficult to suckle it by piglets. In many cases, a sow may be unable to feed her piglets.

A sow can suffer from mastitis, which is caused due to the bites of piglets’ teeth. It is the reason why the clipping of teeth is instructed to prevent the wounds of the teats.

Frankly, when you consider any animals, there is nothing like ‘better’ gender. But you should definitely consider the various attributes of each of the genders.

Finally, keeping both (male and female) has its advantages when it comes to harvesting. As discussed before, the main difference between the two lies in size, weight, and behavior (the differences aren’t significant).

Talking about behavior, you can enrich the males’ behavior that can be improved through neutering. As a statement, hogs and sows have the same demand. It’s your choice that matters.

10 Reasons That Goats Are Awesome Pets for Homesteaders