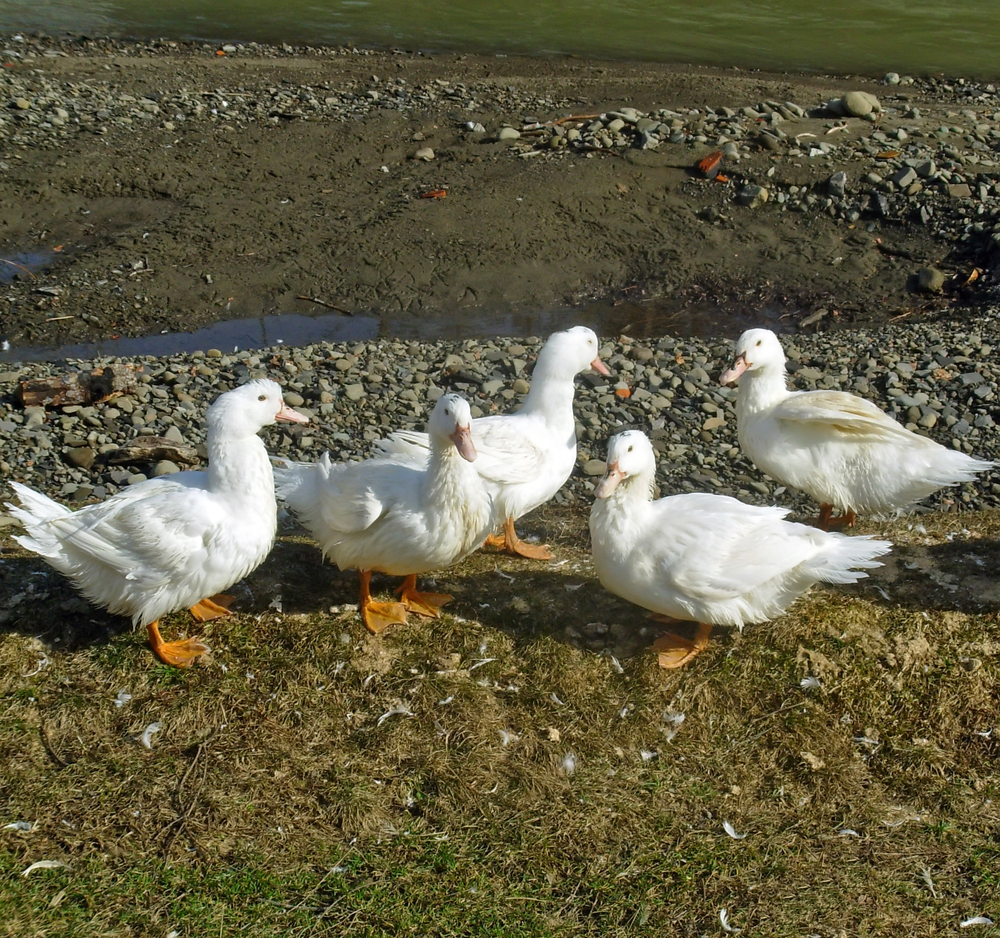 Apart from the divine fat, this red but not-so-red meat is an excellent source of zinc, iron, selenium, and all things good. Maybe it’s for the same reason why many people have moved from chicken to duck poultry farms.

Now you ask why? Not only are ducks easier to raise, but they also are pretty spirited when compared to chicken and grow much faster. Almost with the same needs as chicken, ducks are somewhat easier to maintain.

There are over 1000 duck breeds in the USA alone. But a lot of them are considered endangered or extinct by the American Livestock Breeds Conservancy. So, the only way to save these breeds is to bring them to the dinner plates.

So, we have come up with a few of the best and yummiest meat duck breeds, our favorites. Whether you are out on casual research or a serious poultry look-out, we’ll give you all there is to know about these duck breeds covering everything from temperament to fertility.

Here’s 9 of our favorite meat duck breeds, their positives, and negatives.

Pekin ducks are preferred for both meat and eggs. They are very quickly domesticated because of their calm and friendly nature.

At their mature age, the ducks can weigh something up to 11-12 pounds. These birds’ lifespan is around 9-11 years, and their cost of maintenance is pretty low compared to other duck breeds.

Pekin meat is one of the best quality and makes immensely flavorful dishes around the globe. They are often free-range ducks and love to find their food around the farm and pond, if nearby.

The Pekins is a popular choice for not only local farmers but also for commercial purposes.

Muscovy ducks stand quite apart from other duck breeds. They are good mothers and stay with their ducklings until they grow to be on their own.

Muscovy ducks can be identified by the red bumps on the face and head. These red bumps are more common in females than in males. These birds can fly, unlike other ducks.

This breed has a considerably large appetite, which means even if you provide them with a free range of food, it’s never enough. The meat has a very peculiar taste but with 98% less fat than other breeds.

It almost tastes like roasted beef. The taste also depends on the kind of food the ducks consume. The breast of these ducks yields 50% more meat than any other duck. But on the other hand, they lay very few eggs throughout the year.

These ducks have originated from the United Kingdom. They are famous for their white feathers and skin. Generally, their necks are slightly elongated like swans.

Aylesbury ducks are the most desired ducks for petting and also for commercial purposes. Their meat is clear white, extraordinarily flavorful, moist, and tender. Their meat yielding capability makes them even more popular than other ducks.

The young ducks take only about 5-9 weeks to reach the optimum weight to be ready for intake. They lay an average number of 35-125 eggs per year.

Originated in France, these ducks are often considered to be a multi-purpose breed. They look quite like the wild duck (Mallard) with a brown patterned body for females and a shiny green head with a purple body in males.

The female weighs around 7 pounds, and the male weighs 9 pounds in maturity. They are incredibly peaceful, slow-moving ducks to pet.

On average, Rouen should be laying 140-180 eggs, if fed well. However, they are hefty but slow-growing and takes a few extra weeks than other ducks to reach the desired weight.

The profound taste of the meat is not just less greasy but also succulent. Due to the enormous size, they also yield a good quantity of lean meat. They are free rangers and good to find in the backyard.

Pomerania, a part of Sweden, is the originating location of these ducks, hence the name. Swedish duck, also known as Blue Swedish.

Comparatively smaller in size, females weigh around 2.5-3.5 kilos and males weighing about 3-4 kilos. The head of this duck is slightly blue, and the body has a shiny green hint.

Overall the bodies have blue, white, and green hues. They lay almost 100-150 eggs in a year and try to incubate the egg. The flavorsome meat is probably due to the free-range and good forage. They are pretty easy to take care of, even for beginners.

Mostly domestic, the Saxony breed of ducks originated in Germany back in the 1930s. It is a pretty heavy duck and serves a dual purpose, both meat, and eggs.

Speaking of their structure, they generally have a prominent chest with a long rounded body. Almost typical to the Mallard pattern, their drakes are blue-gray with head and wing markings. They are known for less fat, flavorful meat, which is relatively lean dark in color.

Saxony ducks are more of the calm temperament ones which do not fly around and are also quite gentle in their ways. However, they can be somewhat noisy, the female ones in particular.

One great thing if you are considering breeding this type of duck is that they are incredibly active, can be great foragers, and root out insects pretty easily to supplement their diet.

Khaki Campbell is a British domestic breed of ducks almost like an all-purpose breed. It is a light breed which takes considerably smaller room than other larger breeds like Pekin or Saxony. With a slightly nervous temperament, these ducks can get easily spooked and do not fair very well.

Khaki Campbell ducks can be easier to handle, given that it is only approximately 2 kg in weight. If you want a breed primarily for meat production, these do quite a good job, sometimes even better than the Mallard.

These ducks lay about 300 eggs a year, which is exceptional and almost a shame for the other breeds. The eggs weigh roughly 75 to 85 grams, which is again larger than a Mallard egg.

Khaki Campbell ducks have incredible eyesight, which makes them great foragers. Other than that, they are also quite fertile (87%).

We agree duck meat is simply yum whichever breed you go for. The Khaki Campbell is not great as Muscovy but is far betting eating than any Mallard one.

The Cayuga is a popular breed in the United States and is a domesticated variety. A lot of people wouldn’t know, but Cayuga is a cross between the Rouen and East Indies duck.

Like you would’ve expected, this mix of breeds offers an exceptional flavor to the meat, which suits the more refined dining criteria. But, as they have dark feathering, cleaning the carcass can become quite a task.

Cayuga ducks lay about 100 to 150 eggs a year, which is initially slightly darker in the shade but lightens out by the end of the season. They have an incubation period of 28 days. These ducks are pretty broody and are often found to sit and hatch eggs. They are also quite remarkable as foragers and enjoy eating insects, snails or slugs.

Many people treat Cayuga as an ornamental or exhibition breed, primarily due to their docile nature and dark feathering. These ducks have a lifespan of 8 to 12 years.

Ancona is a rare breed initially found in England in the early 20th century. This breed is a cross between the Belgian Huttegem Duck and the Indian Runner Duck. They are similar to Magpie ducks due to the same foundation stock, except they are slightly stockier.

Ancona ducks are mostly medium-sized, identified by the black or green spotting on the head, solid white legs, and orange feet with black spots.

Although Ancona is a breed mainly for eggs, it also provides pretty delectable, less fatty meat. They lay about 200 to 280 eggs per year, which is higher in an initial couple of years and becomes lesser with age.

These ducks have a lifespan of roughly ten years. They can be great foragers cleaning away the slug and insects when allowed free range.

The good thing about duck meat is that mostly they cannot be treated with hormones or antibiotics as there are only very few antibiotics allowed for ducks.

Furthermore, these are also routine and do not affect feed efficiency.

Generally, duck meat has a significantly higher fat content than any other poultry, say turkey or chicken. It has a stronger taste profile and is also more nutrient-dense than you think.

While most duck meat cooking styles render the fat off, making it crispy and lean, this rendered fat is far healthier than butter or other animal fats.

All this duck talk has me starving! On that note, let’s not indulge in the myriad ways of succulent duck preparations and save it for the next blog.